The Ministry of Environment, Forest and Climate Change (MoEF&CC) has notified the new Forest (Conservation) Rules, 2022 (FCR, 2022) under the Forest (Conservation) Act on 28 June replacing earlier Forest (Conservation) Rules notified in 2003 and its amendments in 2004, 2014 and 2017. The approval for de-reservation of forest land, use of forest land for non-forest purposes or for assignment of lease, is to be accorded by the Central Government in two stages, namely ‘In- Principle’ approval and ‘Final’ approval. For this, the new rule states to constitute an Advisory Committee, Regional Empowered Committee at each of the Integrated Regional Offices and Project Screening Committee (to be made by the State Government and UT Administration). Unlike before, when the proposals were handled by MoEF&CC’s regional office or state (depending on the forest area) and the decision of granting approval was taken by the Ministry based on Advisory Committee’s recommendations, now the process is to be dealt by bureaucratic systems of the Forest Department for most of the cases.

The application of project proponent submitted online to the State Government or UT Administration shall go through various levels i.e. Divisional Forest Officers, District Collectors, Conservator of Forests, Chief Conservator of Forests and the Nodal Officer of the State Government or UT Administration, Project Screening Committee and Integrated Regional Office. All proposals related to linear projects (rail line, road, pipelines etc.), forest land up to 40 hectares and use of forest land having canopy density up to 0.7, shall be examined in lower bodies i.e. the Integrated Regional Office (land upto 5 hectares) and referred to the Regional Empowered Committee (for land 5-40 hectares) which will grant ‘In-Principle’ approval ‘faster’. The intervention of the central advisory committee will arise only for proposals related to de-reservation, mining involving forest land of more than 5 hectare, regularisation of encroachment and violation of the provisions of the Act. The Central Government shall, after considering the recommendation of the Advisory Committee, grant ‘In-Principle’ approval and communicate the same to the concerned State Government or UT Administration. In the next stage, on receipt of a copy of the ‘In-Principle’ approval, the Divisional Forest Officer shall prepare a demand note containing amount of Compensatory Levies, to be paid by the project proponent who shall make payment and hand over the land identified for Compensatory Afforestation, a compliance report along with copies of documentary evidence to the Divisional Forest Officer. The Central Government after having received the compliance report and ensuring its completeness via  Divisional Forest Officer, Conservator of Forests, Nodal Officer, Principal Chief Conservator of Forests of the State Government would accord ‘Final’ approval and communicate such decision to the State Government or UT Administration and the proponent.

FCR 2022 blatantly violates the requisite to take consent from the tribal and forest dwellers as per Forest Rights Act, 2006 before any ‘final’ clearance would be given. Years of struggles had resulted into enactment of the Forest Rights Act (FRA) which recognizes the individual and community rights of the forest dwelling scheduled tribes (FDST) and other traditional forest dwellers (OTFD) to forest resources, on which they have been dependent for their lives and livelihoods for generations. According to FRA, it is mandatory to take the approval of the tribals and forest dwellers of the area through the Gram Sabha and settle rehabilitation and compensation before starting any project which would change the character of the forest land. The point 9.6.b(ii) in FCR 2022 states, “The State Government or Union territory Administration, as the case may be, after receiving the ‘Final’ approval of the Central Government, and after fulfilment and compliance of the provisions of all other Acts and rules made thereunder, as applicable including ensuring settlement of rights under the Scheduled Tribes and Other Traditional Forest Dwellers (Recognition of Forest Rights) Act, 2006 (No. 2 of 2007), shall issue order for diversion, assignment of lease or de-reservation, as the case may be.” It is to be noted that the provision of compliance to FRA has been mentioned after giving ‘Final’ approval which evidently is nothing but a mere formality. When the clearance for forest diversion is already given, land for compensatory afforestation and Net Present Value money have been deposited by the project proponents, how could the claims and rights of the forest dwellers be justly recognized? The settlement of forest rights, decision of the Gram Sabha which earlier was a pre-condition to grant any clearance on contrary now becomes just a ritual to be observed where every clearance is pre-approved and the forest land is ready for diversion. There is no mention of 'Gram Sabha' even once in the notification of this rule. Not only that, with FCR 2022 the Central Government also walks away from the responsibility of ensuring rights and compensation of the Scheduled Tribes and the traditional inhabitants of the forest lands and purposely shifts the burden only on the State Governments. With a ‘final approval’ sent by the central government in hand, asking a state forest official to look into the FRA compliance is nothing but a farce. Instead of seeking a free, prior and informed consent from the Gram Sabha before granting final approval and allowing cutting of trees for any project, the new rule is sought to make them irrelevant and disempowered and pave ways for the corporate.

From Environmental Impact Assessment (EIA) to FRA, Modi Government has made all efforts to weaken and dismantle the environmental and forest regulations in the name of ‘ease of doing business’. Dilution of EIA act, multiple violations of FRA to avoid NOCs from Gram Sabhas for linear projects, pushing FRA compliance requirement to the ‘final stage approval’ instead of ‘in principal stage I approval’ were few of them. On one hand, the environmental laws are being relaxed to bestow fast track clearance to the private parties and on the other hand, rules are made less threatening to potential violators. In exchange of ‘compensatory levy’ enumerable forest resources and biodiversity is being lost for which real compensation is never possible. Moreover, the amount of NPV (Net Present Value of forest land equivalent to the Compensatory Afforestation land) had been kept almost the same for 13 years since 2009 and hiked marginally in January 2022 despite of the order of Supreme Court to hike the amount every three years. The Compensatory Afforestation Fund Act, 2016 also failed to provide specific periodicity for revision of NPV. To make the process of diversion or dereservation of forest land less time consuming and to transfer forest land to private parties without any hindrance, the FCR 2022 have various compensatory afforestation schemes which are literally incapable of replacing centuries-old forests that would have been cut, uprooted and burnt in the name of 'development'. The objective is not restoration of the forest ecosystem but to make forest lands easily available for the corporate vultures.

The Forest Rights Act of 2006 created an inclusive and collective framework for forest conservation and management by recognizing the social, cultural, environmental and livelihood rights of indigenous and forest-dwelling communities. Kinnaur hydropower project in Himachal Pradesh, bauxite mining of Vedanta in Niyamgiri, steel project of POSCO in Orissa had to be withdrawn due to the collective mandate of the Gram Sabha empowered by FRA. This new FCR has been introduced to take away this powerful safeguard from the tribals and forest dwellers and streamline handover of forest lands to Adanis, Ambanis, Jindals and Vedantas to make profit out of the vast mineral and other natural resources of forests.

The Forest (Conservation) Rules, 2022 will be placed before the Lok Sabha and the Rajya Sabha in the upcoming session. We must unequivocally protest against this illegal rule brought by the Central Government that disregards Gram Sabhas, violates forest rights, threaten the forest and forest dwellers in corporate interest! FCR 2022 must be repealed unconditionally! 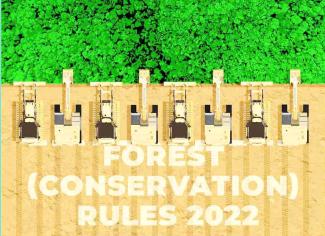