As a collective of Muslim women including academics, scholars, activists, researchers, creatives and analysts from various parts of the globe, we have observed the advance of the Taliban forces throughout Afghanistan, and the simultaneous withdrawal of foreign occupiers, with both interest and concern. We welcome the end of the illegal invasion and occupation of Afghanistan by foreign forces. We sincerely hope that all Afghans will have the opportunity to build and contribute to their communities, upholding a society governed by a democratic, just and credible leadership rooted in mutual respect for the human rights of all citizens.

Our intention in presenting this statement is to offer a counter-narrative to the triumphalist responses of some fellow Muslims who appear determined to excuse the Taliban’s past records of abuse and the abrogation of the rights of women, children and minorities. The dismissal of  the historical record is based, to a large extent, on the assertion that the organization has “matured” in recent years. We draw attention to this dangerous erasure of the lived experiences of women and minorities in Afghanistan and express caution at the absence of a public narrative for restorative justice.

Simultaneously, we reject the alarmist and Islamophobic narratives of media outlets that reproduce tired tropes suggesting that Muslim women everywhere are oppressed and require ‘saviours’. Nonetheless, given the Taliban's history in Afghanistan, we are deeply concerned that advances made in the arena of gender and sexual rights, particularly in relation to bodily integrity, autonomy, education and work, will be eroded by the new regime. The struggle against narratives that serve the interests of imperialism cannot be used to deflect attention from legitimate concerns about the oppression of women and minorities. Given that these concerns are based on the Taliban's historical track record, they cannot be denied, dismissed or excluded from any future narrative of Taliban rule.

As Muslim women, we strongly oppose any notion that abuses such as forced marriage, denial of education and suppression of voice and agency are congruent with Islam; nor do we accept that they represent the Prophetic example. The historical record shows that they arise instead from patriarchal cultural and economic practices rooted in chauvinistic interpretations of religious texts.

It is our candid hope that any new legislative efforts will include a substantial number of women legal experts, and maintain universal human rights principles based on equality and restorative justice for all who live in Afghanistan. We will continue to observe, closely, the unfolding situation in Afghanistan and to use our collective resources to demonstrate our support for and solidarity with our sisters and the minority communities of Afghanistan, including their rights to involvement in the drafting and framing of policies, laws and socio-political systems of governance. Should there be any attempts to suppress or oppress them, as a collective, we pledge that we will not stand idly by and allow their voices and their dreams to be silenced. 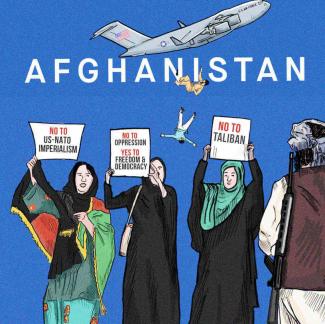