The Modi government is known for its penchant for springing periodic shocks and desperate measures. In economics we have been familiar with the demonetisation disaster and GST, in politics with the sudden stripping of Jammu and Kashmir of its constitutional status and statehood or the passage of the Citizenship Amendment Act or more recently the farms laws. The latest shock inflicted by the government has a strange name – National Monetisation Pipeline or NMP. True to the Modi government’s habit of bypassing parliament and not holding any prior public discussion with concerned stakeholders, the government announced this sweeping grand plan on 23 August, soon after the monsoon session of Parliament.

Let us first consider the case being made by the government in support of the NMP. The government says it hopes to earn about 6 trillion rupees over the next four years by leasing out public assets in thirteen sectors. We are told that these are assets that are languishing or remaining underutilised, by leasing them out the ownership still remains ‘public’ and the money the government makes will be used to fund new infrastructure projects. In other words, it is a very judicious use of national resources by the government and it certainly does not involve any privatisation since ownership remains with the government.

Modi government assures us that there will be no transfer of ownership. But what will be the duration of the lease. Niti Ayog CEO Amitabh Kant has said that average duration of the lease will be forty years. Assuming the resources return to the public after the expiry of the lease period, we must keep in mind the kind of depreciation most of these assets will suffer in these forty years. It is also not difficult to see who will grab most of these strategic and lucrative assets. Given the profile of these assets and the growing infrastructural interests of India’s two topmost billionaires, Mukesh Ambani and Gautam Adani, the answer is pretty obvious.

During his last three Independence Day addresses, Narendra Modi has been repeating his grand idea of investing one hundred trillion rupees in India’s infrastructural development. Even if the government succeeds in realising the projected six trillion rupees through the NMP route, it will hardly fund the government’s proposed infrastructural investment plans. It is therefore not difficult to guess that the funds will effectively be used to meet the government’s growing deficit and declining revenue. In other words, the Modi government is mortgaging the future interests of at least two generations to manage its present crisis.

The government may earn six trillion dollars over the next four years if the NMP projections are right and duly realised. How much will the wealth of Ambani and Adani grow during this period? If we take the rate at which their wealth has grown during the pandemic period (Ambani has added Rs 90 crore every hour in 2020 and Adani Rs 75 crore during the first five months of 2021), the wealth of India’s richest duo will accumulate another sixty trillion (165x24x365x4 = 5,781,600 crore) rupees over these four years. And this does not take into account the incremental wealth that will accrue from the newly acquired NMP assets. In other words, NMP will further aggravate India’s obscene extreme inequality, where the richest one percent people already account for more than forty percent of India’s total wealth.

With assets, the government will naturally also shed jobs. Less government jobs will mean loss of reservations for the socially deprived and loss of job and income security for all who will now have to look for jobs in private companies. There will be bigger blows to wider sections of people. Prices will go up with little regulation by the government and growing monopoly power of the big companies. Tariffs of all services are already going up, and the government has already amended the Essential Commodities Act to pave the ways for an across the board rise in prices of all essential items.

While consumers will have to bear with increased prices, small traders, roadside vendors and livelihood earners will suffer a major jolt. Privatisation of roads will mean appearance of toll plazas and expensive eateries and disappearance of roadside dhabas, tea stalls and repair shops. Adani-Ambani railway stations will be more like airport lounges and shopping malls where food courts and expensive coffee shops will replace the fruit and tea vendors and providers of cheap meals who will lose their access to stations and trains.

Like the new farm laws and labour codes, the NMP is also designed entirely to promote Adani-Ambani Company Raj. India is yet to recover from the blow of November 2016 demonetisation, the combination of note ban and GST has already crippled India’s MSME sector, small traders and ordinary consumers. NMP by its very nature will have much more enduring effect, with the public sector virtually being replaced by powerful private players and consumers and small producers being completely subjugated to the extortionist ways of big business. India will have to resist this trident attack of new farm laws, new labour code and the wholesale mortgaging of public assets built with public money to crony capitalists. Let the 27 September Bharat Bandh sound a powerful bugle call of united resistance to the disastrous Modi laws and policies. 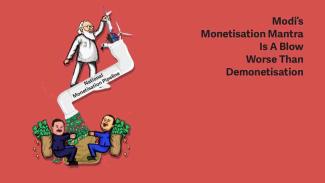