PM Narendra Modi, in a speech and an op-ed piece, claimed that India in his leadership had achieved an impressive and “historic” vaccine victory, having administered 100 crore doses of the Covid-19 vaccine on October 21, 2021.

With this vaccine boast, the Modi regime is trying to build up his image as a “vaccine man”, to get rid of his image in India and abroad as the man responsible for criminal failure on the Covid-19 front, costing millions of Indian lives during the first wave lockdown and the second wave Covid-19 crisis. Modi knows that the terrible images – of bodies floating down the Ganga and people gasping for breath and dying for lack of oxygen – still haunt public memory. The Allahabad High Court, on 5 May 2021, had issued this damning indictment of the BJP government at UP and the Centre, stating that the “death of Covid patients just for non-supplying of oxygen to the hospitals is a criminal act and not less than a genocide.” With an election in Uttar Pradesh coming up soon, the Modi regime seeks to replace the traumatic memories of its crimes with hype of a supposedly historic success on the vaccine front.

But the hype does not stand up to scrutiny. The Modi government had promised to achieve the target of 100 crore doses in three months – instead it has taken nine months to do so. It had promised that all adults would be vaccinated by the end of 2021 – India is still very far from achieving that target.


By delaying vaccine procurement, leading to an acute shortage; encouraging massive gatherings like the Kumbh Mela in April 2021; sending out misleading messages suggesting that Hindu devotees would not get Covid-19; fabricating testing data at the Kumbh to create a false sense of safety; and failing to ensure sufficient oxygen in hospitals, PM Modi and other leaders from his party BJP, are personally responsible for boosting the size, scale, and deadliness of the second wave. PM Modi has since then deliberately suppressed data on Covid-19 second wave deaths, admitting to just 4 lakh deaths when the actual number is closer to 40 lakh deaths. Even today, Covid-19 orphans and bereaved spouses struggle to survive, receiving no acknowledgement let alone support from the government. In the first wave, PM Modi’s cruel and unplanned lockdown cost lives of countless migrant workers and plunged India even further into joblessness. Now, PM Modi wants to use his pet media houses to transform the true story of his criminal Covid-19 failure into a fictional story of vaccine success!

A panel of global scholars prepared a “rogues gallery” of world leaders whose bungling of Covid-19 policy needlessly caused avoidable deaths on a massive scale. Narendra Modi tops that list, which includes Jair Bolsonaro of Brazil, Alexander Lukashenko of Belarus, Donald Trump of the United States, and Andrés Manuel López Obrador of Mexico. Such leaders need to be held accountable for the criminal loss of lives.

It is worth remembering that in Brazil, a congressional panel has submitted a 1200-page report recommending that President Jair Bolsonaro be charged with “crimes against humanity” for his bungling of Covid-19 policy that has caused the deaths of 6 lakh Brazilians. This report also indicts two top executives of Bharat Biotech’s former business partner in Brazil, Precisa Medicamentos, for “running an organised crime”, besides fraud and forgery. In India, too, we need to expose and reject Modi’s attempts to self-certify his own performance, call out his lies, and hold his Central Government as well as concerned state governments accountable for the Covid-19 and lockdown catastrophes which are indeed “crimes against humanity.” 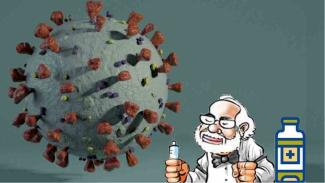