The COP26 summit held in Glasgow had hoped to limit the rise in global temperatures to 1.5 degrees Celsius, but failed as nations failed to balance developmental goals with the effects of climate catastrophe.

The 2021 United Nations Climate Change Conference, more commonly referred to as COP26, was held between 31st October and 12th November in Glasgow. The key objective of the summit was to ensure that the rise of global temperatures was limited to 1.5 degrees Celsius above pre-industrial levels. The scientific consensus is that any rise beyond this temperature would result in cataclysmic climate change that would devastate the world. Thus COP26 was branded the ‘Last and Best Hope for Humanity’, as we are quickly approaching the point of no return on climate change. By the time the curtains came down on the conference, it became clear that world leaders who had assembled on the stage had failed to live up to the expectations from them.

While the world faces an energy crisis with the approaching winter in the northern hemisphere, participating nations were required to demonstrate real commitment to long term goals over short term inconveniences. China’s trade war with Australia has resulted in a coal crisis, while the UK is also facing the possibility of a power shortage in the aftermath of Brexit. The shortage meant that coal prices surged globally and even India faced the prospect of power outages as coal reserves in power plants in India ran low. While fossil fuel interests have seized the opportunity to push for its greater use, the crisis actually demonstrates the fundamental unreliability of coal as a sustainable and reliable source of our energy needs.

Despite overwhelming scientific evidence, a growing trend in capitalist circles has been increasingly skeptical of ‘anthropogenic climate change’. Donald Trump emerged as a champion in these circles as he branded any effort to cut down on carbon emissions as a ‘globalist’ conspiracy and withdrawing from the Paris Accord. It is true that some communities in the US (as everywhere else) that have traditionally had coal mining as their principal economic lifeline, and will be disproportionately be affected by the shift to Green Energy, it is the responsibility of the respective governments to ensure that the transition to renewables is as smooth as possible. Conservatives and Radical Right groups around the world have increasingly spoken out against cutting down on carbon emissions, which has in turn made any global understanding on climate change increasingly reliant on partisan political pressures, subject to sudden and unforeseen reversals. A leak of documents in October 2021 showed that wealthy countries like Australia, Japan and Saudi Arabia had lobbied the UN to play down the need for a rapid shift away from fossil fuels.

India faces an existential peril in the form of climate change as we have already been impacted by what have been called Extreme Climate Events in the form of cyclones, cloudbursts, landslides, severe droughts etc. Yet the Indian government (along with China) intervened at the last moment to water down the resolution on ending coal power and fossil fuel subsidies, in an act that can only be described as a form of self-sabotage. This was the result of the failure to get wealthier nations in the Global North to commit to investments of $1 trillion into developing economies.

The Modi government has often claimed that India’s profile on the global stage has been improved by Narendra Modi’s numerous foreign trips since he came to power in 2014. Reality however shows a different picture as India’s interests were largely ignored and we instead emerged as the villains on the global stage for torpedoing an essential agreement. The Indian government has since protested the ‘negative’ coverage of itself, suggesting that the particular phase emphasizing ‘phase down’ of coal, as opposed to the suggested ‘phase out’ of coal, was taken from the US-China statement. Even so, one must ponder upon the naivete of the Indian officials, who apparently read out a statement on the international stage to which it had not agreed! It must also be noted that while India’s national interests are in preventing climate change, one of Modi’s closest backers is the Adani group, which has invested heavily in coal mining in Australia.

The Last Hope for Humanity

The Swedish environmental activist Greta Thunberg joined a protest of more than one lakh people in Glasgow stating "It is not a secret that COP26 is a failure. It should be obvious that we cannot solve a crisis with the same methods that got us into it in the first place”. Any attempt to address the climate crisis in a manner that doesn’t entail an enormous cut down of emissions is simply a delusion. Yet global leaders have maintained a ‘business as usual’ attitude, which will clearly not suffice.

The Glasgow Climate Pact, which is the new deal reached at the end of the summit, agreed to revisit the emission reduction plans in 2022 in order to try to keep the 1.5 °C Paris Agreement target achievable. It also focused on the ‘phase down’ of the use of coal and climate finance for developing countries. While Chile, Poland, Indonesia, Vietnam, South Africa and South Korea made commitments to phase out coal between the 2030s and 2040s, the largest economies of the world i.e. India, China and the US failed to make any such commitments. India set its target for net-zero carbon emissions by 2070, which is even further behind the net-zero by 2060 target set by China. India, China and other countries also failed to sign up for limiting methane emissions.

45 countries, including India, pledged to invest $4 billion for transition to sustainable agriculture. Given Narendra Modi’s reluctance to engage with farmers on even the most minute of issues, one must remain skeptical of the Indian government’s ability to deliver on its pledge. The focus of the conference on electric cars as a means of sustainable transportation rather than an emphasis on public transportation and cycling was also criticised.

The last and best hope for humanity is clearly the youth all around the world, who have mobilised against entrenched corporate interests to fight for the continued existence of humanity on the planet. We need to build coalitions that can engage in granular levels of struggle from national, state and municipal legislatures to mohallas to factory floors, to keep the collective interests of humanity above the profit margins. 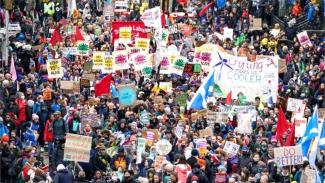 The BJP Agenda of Hindi Imposition

US elections: Key Takeaways and Opportunities for…