It has taken a collective global effort (called the “Pegasus Project”) by human rights organisations and journalists to expose the dubious use of Israeli Pegasus phone-hacking software in at least ten countries including India. These painstaking investigations including independent forensic analysis of phones pose very disturbing questions for democracy in India. It stands established that at least a 1000 Indian phone numbers (belonging to prominent leaders of Opposition, an Opposition election strategist, a large number of editors and reporters, a sitting Supreme Court judge, an Election Commissioner, a range of human rights defenders and activists, as well as a woman who complained of sexual harassment by a Supreme Court Chief Justice, and members of her family) figured on a 2017-18 list of potential Pegasus targets. Forensic analysis of a number of phones belonging to the potential targets has established that several were successfully infiltrated by Pegasus, and Pegasus has been found active this very month on the phone of at least one target – Opposition election strategist Prashant Kishor.

The Israeli company NSO states that it only sells to governments. So either the Government of India, or some foreign government, bought Pegasus (rates of which amount to at least Rs 1.5 crore per phone) to use the personal phones of journalists, judges, and activists to spy on every aspect of their lives, including their most private moments. Such a use of Pegasus is clearly nothing to do with “national security”; it is nothing but politically motivated espionage targeting critics of the ruling party. Information gathered thus can be used to blackmail, control, fabricate evidence against and falsely implicate the targeted individuals, thus undermining the key pillars of democracy: the free press, the judiciary, and an alert and active citizenry.

The Government of India’s bluster in response to these revelations indicates that it has something to hide. It dismisses the Pegasus Project revelations as a “conspiracy to defame India”, and at the same time denies any wrongdoing on its part. If indeed the Government did not buy and use Pegasus to hack phones, then why does it feel “defamed” by the revelations? Why is it not interested in investigating which forces in fact did purchase and use Pegasus to target Indian citizens? Surely, if a foreign power is spying on Indian citizens and meddling in Indian Parliamentary and Assembly elections, and if an Israeli company possesses the private data of Indians in sensitive positions, it is a serious breach of national security? Why is the Government unconcerned about investigating such a breach, and identifying the offenders?

The Government also claims that any surveillance done by it is in keeping with the provisions of Indian laws. Existing Indian laws do allow for phone taps – in exceptional cases where there is a clear threat to public safety – as long as the orders to tap are reviewed by a panel within a week. Pegasus does not tap phones – it hacks them, and hacking is illegal in India. The Government must come clean and tell the Indian public: did it purchase Pegasus or not? Who authorised the purchase, and who footed the bill? Who selected the targets? Was there any panel reviewing such spying and seeking a justification for the selection of each target? Was a woman complainant who accused CJI Gogoi of sexual harassment, along with ten of her family members, targeted using Pegasus? Is there any record of the findings of such surveillance? In whose custody are such records stored?

We demand the immediate resignation of the Home Minister Amit Shah, as the first step towards an independent investigation, that is empowered to seek time-bound answers from the Modi government and its functionaries at every level, to identify those responsible for the criminal use of Pegasus. 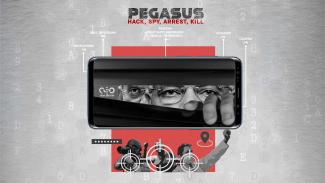