The Narendra Modi government has declared November 15, the birth anniversary of Birsa Jayanti, as Janjatiya Gaurav Divas or Tribal Pride Day. 15 November is also the foundation day of Jharkhand. It is to be noted that the Indian state, especially under the RSS-backed Modi government, prefers not to use the popular word Adivasis for India’s indigenous people. The RSS favourite word for Adivasi is vanvasi or forest-dwellers and the Sangh-BJP leadership tried its best to christen the new state of Jharkhand as Vananchal. After decades of protracted struggle for the formation of the Jharkhand state, activists of Jharkhand movement had to fight hard to ensure that the new state got its cherished name.

Had the BJP been in power in Jharkhand, Modi would have surely chosen Jharkhand as the launching pad for this new day with a lot of fanfare. Mercifully enough, the people of Jharkhand, especially the Adivasis of Jharkhand, successfully voted the BJP out of power in the 2019 Assembly elections. Chhattisgarh, Rajasthan and Maharashtra too are not currently under BJP rule and Modi had to choose Madhya Pradesh for his November 15 rally. The display banners and rally publicity and decoration made it abundantly clear that the rally was more for to promote Narendra Modi and Shivraj Singh Chauhan than honour Birsa Munda and India’s glorious history of anti-colonial Adivasi resistance.

The real irony of the occasion however lay not so much in the name of the day or the choice of venue, but in the stark reality that Adivasis today were faced with the biggest onslaught in post-1947 India on their identity and rights. The policies of the government today are all aimed at facilitating corporate control over India’s resources. Land, water, forests, mines and assets built over decades through public investment and people’s sacrifice are all being systematically handed over to a handful of corporate houses and the people of India are absolutely right when they call this new order ‘Adani-Ambani Company Raj’.

The Adivasis of India are paying the biggest price for this corporate loot, they are among the most immediate and worst victims of this state-backed corporate aggression. This massive and systematic dispossession of Adivasis is being sought to be glossed over and legitimised as ‘economic development’, and any Adivasi resistance to this dispossession is being dubbed an anti-development anti-national act and crushed through severe repression and systematic persecution.

In Jharkhand, adivasis invoking their constitutional rights for their Gram Sabhas under the Fifth Schedule of the Constitution were charged by the Raghubar Das government with sedition and put indiscriminately in jails. Father Stan Swamy was framed under UAPA and eventually driven to death in Maharashtra jail for challenging these sedition cases and demanding the release of Adivasi prisoners. In Sukma district of Chhattisgarh, Adivasis opposing the setting up of police camps were gunned down in Silger village. And the announcement of the Janjatiya Gaurav Divas coincided with the news of the killing of at least 27 alleged Maoists, most of them presumably Adivasis, in Gadchiroli district of Maharashtra.

Alongside this economic dispossession and state repression, Adivasis are also facing an intensified cultural onslaught. The RSS is working overtime to divide Adivasis on religious lines, force many families to return to Hinduism under the ‘ghar wapsi’ campaign and repackage the militant anti-colonial history of Adivasi resistance as a crusade against conversion by Christian missionaries. The Santhal Hool of the 1850s, led by the legendary Murmu brothers and sisters Sidhu, Kanhu, Chand, Bhairav, Phulo and Jhano or the Ulgulan spearheaded by Birsa Munda were essentially mass upsurges against the colonial rule and its twin feudal props of landlordism and usury. The Ulgulan battle-cry of ‘Abua Disum, Abua Raj’ (our rule in our land) – quite akin to the 1857 anthem penned by Azimullah Khan ‘Hum Hain Iske Malik, Hindostan Hamara’ (this country belongs to us, we are its owners) – was a bold articulation of popular sovereignty twenty-nine years before the Congress adopted the Purna Swaraj resolution. The Sangh brigade tries to subvert and appropriate this glorious history and turn it into an appendage of its Hindu Rashtra project.

This real threat of dispossession, repression and cultural subjugation cannot be sugar-coated by paying lip service to Janjatiya Gaurav or tribal pride. Adivasi activists, who are the rightful heirs to their glorious legacy and who are waging a determined battle today against the ongoing corporate and communal aggression to secure their cultural identity and constitutional rights, will have to forge a strong and vibrant countrywide unity to foil the BJP’s clever design and develop close ties of cooperation and solidarity with farmers, workers, youth, women and all oppressed social forces to resist corporate aggression and defeat fascist offensive. The Convention for Adivasi Rights held at Bageecha, the centre developed by Father Stan Swamy in Ranchi, on 14-15 November which culminated in the formation of an all India Adivasi Sangharsh Morcha, marks an encouraging step forward in this direction. 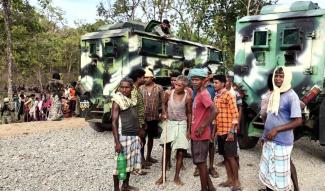