Born Here, Grew up Here, Where Can We go Now?

It was about nine in the morning and the sun was already blazing. In the scorching heat, under the open skies, an infant child lay exposed to the sun. Men, women and children were wandering here and there, trying to find a sliver of shade. On 5 October 2021 the administration had ruthlessly bulldozed the huts in Patna's Malahi Pakdi inhabited mainly by rag- pickers and their families. All the huts were razed to the ground; and not content with that, all goods and possessions were set afire and destroyed. The crime of these families, settled here for about 25 years, is only that they were opposing their eviction from that place  and asking for their huts to be settled elsewhere prior to eviction. It should be noted that the place where these  poor people had their huts is the location planned for the construction of a big station under the Metro project in capital Patna.

"Babu, they have not only razed our huts, they have also smashed our vessels and other belongings. At 9 am on 5 October orders came from the administration to vacate all the huts. We were in the process of vacating when hundreds of assorted policemen came and started beating up people. They hurled foul abuses at us and dragged us by the hair, beating us all the time. They hit Rajesh Thakur on the forehead with such force that he died that night itself. All of us are in a very bad state".

The above was narrated to us by Anita Devi as she showed us blue-black bruises from the police beating on her arms, face and other parts of her body. She added that her son Rohith was brutally beaten with an electric wire. When he went to the nearby hospital for treatment the police followed him there and continued beating him inside the hospital. While the beatings were going on, vessels and goods were also being smashed and broken; cooked food on the stove platforms was being flung out, and other goods were being looted. Anita Devi said, "I used to work washing vessels etc. and earn Rs 2200 per month. All that is gone now. There is no food in the house. We are dependent on the children now; if they bring some pickings from here and there we manage to eat something. When we don't have the means even for food, how can we think of medical treatment? Night and day we are haunted by the fear that the police will come and drive us out from here".

Karmani Devi, cooking rice on a brick stove, said, "We were born here, we grew up here, we were married here only, we gave birth to our own children here...but today everything is in smithereens, where shall we go?" Manju Devi said, "I am borrowing vessels abd cooking food for the children. They smashed and broke everything I had, not even a teaspoon is left. We had a kabadi (rag pickings) shop; they burnt that also". All the families told similar tales of woe. Their first and foremost need is for food and vessels.

On 5 October all limits of brutality were crossed under the leadership of ASP Sandeep Singh. Human rights were thrown to the winds. The brutal police action has caused terror in the hearts of people. They are stunned and terror-stricken after the death of 40 year old Rajesh Thakur. Bearing the brunt of pain, grief and financial straits, these families see a ray of hope in the leaders who are leading the struggle.

CPIML and other Left parties had organized a 2 day dharna at Malahi Pakdi Chowk on 5 and 6 August on the issue of alternative housing arrangements before this eviction. This dharna was led by leader of CPIML legislative party Mahboob Alam, convener of the Urban Poor Front Ashok Kumar and CPIML leader Ranvijay Kumar. That dharna was ended after an assurance from the administration that alternative housing would be arranged before the eviction. A list of families to be evicted was started, and a list of about 250 families was made but meanwhile on 5 October this brutal incident was perpetrated.

After the death of Rajesh Thakur during treatment for injuries caused by the police brutality, thousands of angry urban poor blocked the road at Malahi Pakdi Chowk on 6 October. Holding the anti-poor policies of the Nitish-BJP government responsible for this incident, they protested at the Chowk with Rajesh Thakur's body, demanding Rs 10 lakhs compensation  and a government job for Rajesh Thakur's family, a murder case against the guilty police officials, end to evictions without prior alternative housing arrangements, and implementation of the agreement reached earlier for resettlement of the poor on the land north of the Patliputra sports complex as chosen by the Patna DM. The protest was led by the Urban Poor Front, CPIML and other Left leaders including Ashok Kumar, Umesh Sharma, Puneet Pathak and others.

As soon as news of the urban poor jhuggi dwellers' struggle reached them, MLA and leader of CPIML legislative party Mahboob Alam and AICCTU State Secretary Ranvijay Kumar reached the spot and sat on dharna with the above demands. The arrival of Mahboob Alam further energized the protesters and talks were held with SDO Patna and police officials and an agreement was reached for Rs 4 lakhs (from the administration) and Rs 1 lakh (from the labour department) as compensation, immediate compensation of Rs 20000, Rs 3000 cash under Kabir Antyeshti Yojana and a job for Rajesh's kin in the Municipal Corporation, after which the victim Rajesh Thakur's body was sent for post mortem.

Earlier, Left parties formed a 'Malahi Pakdi Jhuggi Jhopdi Basao Sangharsh Samiti' to intensify the struggles on the above issues. It was decided to irganize a condolence meeting on 10 October for Rajesh Thakur who lost his life fighting for the rights of the poor. Further, a delegation will soon meet the Bihar Minister for Urban Development and the Patna City Commissioner. The joint Left meeting was presided over by CPIML leader Ashok Kumar and attended by leaders including Devratna Prasad (CPI), Manoj Chandravanshi (CPIM) and Ranvijay Kumar (CPIML).

12 youths from jhuggis and jhopdis (huts) have got work in the construction of the station for the Patna Metro at the above site in Malahi Pakdi. Worker Ramkishun Paswan says that they are made to do sanitation, cleaning and other jobs, but get only Rs 260 as wages. He says they are constrained to accept this as the Metro people say, if you want to work, accept this, otherwise leave.

Ramkishun showed us a photo on his mobile. The ohoto was of a Notice Board saying that wages have been fixed for unskilled, semi-skilled, skilled and extremely skilled workers. Nagarjun Construction Company is the employer and the Delhi Metro Rail Corporation is the chief employer.The daily wages fixed are as follows:

However, these 12 workers are getting only Rs 260 per day. These workers demanded a minimum wage of Rs 400. They also went on strike 3 or 4 times but the Metro administration is refusing to implement its own rules. The unemployment crisis is so dire that people are helpless and forced to bear this exploitation. 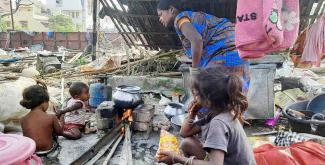