Fascist Onslaught and the Role of Left: Convention on Great November Revolution Anniversary

Communist group merges with the Party

“Bengal carries the legacy and spirit of left. Today, revolutionary lefts must reassert themselves through workers and farmers’ movement, dalit and adivasi struggles, student-youth upsurge and all other forms of mass resistance.  Issues of climate justice, unemployment, human rights protection must be among the fundamental concerns”, Comrade Dipankar Bhattacharya said at the convention held in a packed auditorium at Rabindra Bhawan, Asansol, West Bengal on 7th November, the historic day of 104th anniversary of the Great November Revolution. From this Convention on 'Fascist Onslaught and the Role of Left', a Marxist-Leninist group named State Organising Committee (SOC) formally merged with CPI(ML) Liberation. The convention started after the hoisting of the red flag by CPIML General Secretary Dipankar Bhattacharya and paying of homage to the martyrs. After the opening song, Somnath Chatterjee, leader of erstwhile SOC and a prominent trade union leader in the adjacent coal belt, declared merger of his organization with the Party by raising the Party flag and expressing their pledge of unity. Leaders including Com. Somnath Chatterjee, Com. Lebachand Tudu (adivasi leader from Jhargram Gopiballavpur Jungle Mahal area), Com Tapan Mukherjee (leader of Midnapur Sanitation workers union), Com. Badre Alam (peasant organizer of Aushgram -Galsi of East Bardhaman), Mojammel Haque alongwith hundreds of organizers and members joined the Party. Greeting all of them, the General Secretary said, "From this convention, several experienced comrades have united with our party. This process of unity is raising new hopes in all."

Intensive campaigning for this convention was run enthusiastically in Asansol and adjacent area for weeks which caught the attention of democratic and progressive sections and many of them joined the convention. Com. Atanu Chakravarty and Com. Jayatu Deshmukh from party state committee gave introductory speeches in the beginning. Central leaders Com. Kartick Pal and Com. Salil Dutta were among the members in the Presidium. Com Surinder Kumar, Secretary West Bardhaman District Committee of CPIML conducted the proceedings of the convention. Com. Somnath Chatterjee, in his brief speech mentioned emphatically that the need of the hour is to build a strong resistance against the fascist onslaught and all the small left revolutionary forces should come forward and unite under the banner of CPIML Liberation. Com Lebachand Tudu said that the struggle to save jal-jungle-zameen from corporate plundering must be combined with the fight against fascism. CPIML Liberation is a true Communist party in India and to strengthen this united struggle we have joined this Party. He also criticized the state government and mentioned that though a welfare board has been formed but the wellbeing and interest of innumerable adivasi communities has been neglected, and adivasis are pushed to the margins. Dalit activist Shaktipada Badyakar emphasized that awakening of the marginalized dalits and the radical transformation of the society can be taken forward combining the ideology of Ambedkar and Communism. Comrade P K Das, a prominent trade union leader of steel industry mentioned, during decades of 60s exemplary working class movement in this vast industrial area achieved significant victories and the left forces garnered good mass base among the industrial workers. But at present the reactionary forces have raised their head, parliamentary cretinism of a section of lefts during the yesteryears weakened the left movement. We need to build a strong cadre force to organize campaigns against the false narrative spread by fascist forces. People are looking for alternatives and we must overcome our weaknesses and take the lead.

Com. Dipankar in his speech mentioned about the glorious history of November revolution and the lessons we must take from that. We should not forget that 104 years ago, Russian people fought for food, peace and democracy and established all those rights for which we are fighting now. People across generations are coming forward to strengthen this struggle taking inspirations from our martyrs. We know Khudiram Bose sacrificed his life fighting against British rule at his tender age. Same was with Shaheed-e-Azam Bhagat Singh. While we are celebrating 75 years of independence, forces which betrayed the freedom struggle and openly served the British are now trying to change the history. The followers of Hitler and Golwalkar are now ruling the country. To fight against this fascist regime, we need courageous resistance. We witnessed how valiantly Father Stan Swamy resisted the fascists at the age of 84. The ongoing farmers movement has put up a formidable challenge against the Modi rule. In Shaheen bagh, similar movement was built for right to equal citizenship. Adivasis are in the forefront of the struggle to protect natural resources from corporate grab. Working class is fighting hard to resist the rampant sell out public sectors and national assets. The real opposition to Modi's rule are all these movements of farmers-workers-students and the forces fighting for democracy and freedom. Our prime responsibility now is to combat fascism ideologically and courageously, by taking significants roles in all mass movements and creating broader unity.

On high notes of hope, courage and determination, the convention was concluded with the song International. 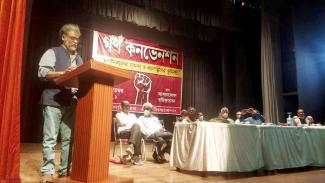