Caste Atrocities Against Dalits and Police repression at Thiruvaikavur, Thanjavur

By A Simpson KG Desikan
Reports

In recent times, particularly after the assumption of power by the DMK, we are witnessing scores of incidents of oppression of Dalits in various places of Thanjavur and nearby districts of delta region of Tamil Nadu. Several people are getting killed mainly from among Dalits, including some Left activists. Dominant backward caste forces are attacking Dalits with renewed vengeance.

Thanjavur district unit of the party, CPIML, organised a protest on 18th November 2021 at Kumbakonam amidst a heavy downpour because of cyclonic predictions. The protesters demanded action against the police Sub Inspector of Kabisthalam police station who was responsible for the antagonism of a minor nature snowballing into a police repression on Dalits and violation of human rights. Incidentally, Kabisthalam is also a native place of GK Moopanar. The protesters also demanded immediate end to the practices of untouchability and putting common properties for the public use of Dalits. The police, despite filing cases on equal number of 26 people from each community, Dalits were framed under many gravest non-bailable charges including attempt to murder (IPC 307) and more than four cases each while the other side was framed only under prevention of atrocities act. Ironically, Dalits who were in hospital for grievous injuries, inflicted by dominant caste attack, were framed under the charges of attempt to murder. Hence, the protesters demanded immediate withdrawal of all false cases against Dalits. Vanniyars, being the overwhelming majority and wielding political and other powers, constitute the dominant caste in this particular village.

The flash point of the antagonism was almost cooling down and was coming to an end with the peace committee meeting on 18th Oct 2021. But, on the same day, suddenly, one of the district vice presidents of Revolutionary Youth Association (RYA), Thiagarajan, an auto driver, on the way to pick up some passengers, was attacked grievously by the dominant caste forces in the presence of police force. Then, people from Dalit hamlet assembled in hundreds demanding justice to Thiagarajan. The dominant caste forces resorted to counter mobilisation and started pelting stones on Dalits. Perhaps, stone pelting was from both sides. In the melee, two of the police were hit by stones unintentionally and the police resorted to heavy lathi charge only on Dalits. It is alleged that the police played into the hands of dominant caste forces in attacking Dalits and also for one-sidedly framing charges under non bailable sections against Dalits.

More than 10 people including women, students and youth were admitted to hospital and more than 25, including those hospitalised, were lodged in different jails. More than 9 out of 25 are students and youths belonging to RYA and AISA. AISA activist Senkathir, who was not on the spot, also had false cases foisted on him, and is trying for anticipatory bail. One of the state secretaries of RYA, Senthamizh is already languishing in the jail for more than a month now. More than four Dalit women are in jail. In one family, four people, husband, wife and two daughters are in jail. Likewise, there are three such families. Police forced their way into their homes and arrested and imprisoned entire families. In one family, husband and wife are in jail while their child is lying crying at home without any caretaker. Two sons of our party’s block secretary have false cases foisted on them. One young student Lenin who was ill for a few days died due to delay in medical treatment as a result of this situation.

In view of atrocities on Dalits in Thiruvaikavur village of Thanjavur district, “the Peoples Movement for Justice” instituted a Fact Finding Team (FFT) comprising of Arasa Muruga Pandian of PUCL, Desikan of AICCTU and Ravikumar, advocate of AILAJ (All India Lawyers Association for Justice) led by its State convener, A Simpson. The team visited the affected villages, interviewed involved communities, the police officials and also the administration.

Untouchability Practices – Basis of the Conflict

The FFT came to the conclusion that the simmering antagonism between Dalits and dominant caste were mainly because of practices of untouchability that were prohibited by the prevention of atrocities act. Another significant fact observed by the FFT was that none of the Dalits owned any land while all families of dominant castes owned land, although being not so big land lords. Dalit agricultural labourers were paid meagre coolie of only Rs 150 for women and Rs 200 for men. Some Dalit youths are educated now and their questioning of inhuman practice of untouchability is being retaliated by the dominant forces, fearing loosening of their grip over their Dalit labourers. This first major incident of caste oppression, in the opinion FFT, is fuelled by the motivated false charges and brutal repression by the police that displayed a mentality of domination against Dalits. In fact, most of the youth, students and women who were foisted with grievous cases were not really engaged in the incident. More than 12 two wheelers were seized from the houses of Dalits on the subsequent day (19th Oct) to reinforce the cases with material evidence in an after thought which is clearly evident in the contradictory statements made by the Sub Inspector (SI) and the Deputy Superintendent of Police (DSP) before the FFT. All the happenings clearly point to the fabrication of false cases with definite ulterior motives by the police and the administration that is prejudiced against Dalits.

In the light of atrocities and in the course of investigation by the FFT, several instances of practices of untouchability have come to light. The FFT lists them as follows:

These practices of untouchability formed the basis for the simmering antagonism between the Dalits and dominant caste forces, according to the FFT.

Following are the demands shared by the FFT and also the CPIML and AIARLA.

The CPIML has decided to represent the case at all levels including bringing it to the notice of the Chief Minister Mr MK Stalin. The CPIML has also decided to continue with agitations and movement till the untouchability practices are put an end to. 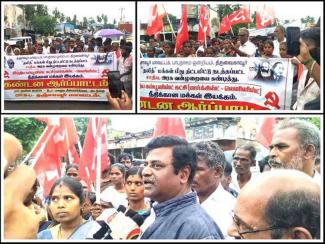